Hello again! I have another set of questions, this time about how to refer to sizes, distances, and weights. I know that the metric system is standard in the UK, but I can't convince myself that it's always used in casual conversation. For example, I just read a DW short story that referred to the height of the TARDIS in feet. Here are a few questions I have.

Hi there! I have a few questions about British language, customs, and geography for some fanfics I'm working on that I hope you can answer. Thank you in advance for any assistance!

1. I'm really fuzzy on the British school system and how grades (years) are referred to. I have a character saying that she's known another character since the year of school in which they were around 12-13 years old. In America, that would be 6th or 7th grade. What would it be for a British student?

2. If you're moving from one town to another and paying a company to move your belongings and furniture, what do you refer to them as? And what kind of vehicle would the items be moved in? In America, we'd call them movers, and they usually use a semi to move multiple clients' belongings in bulk, but it doesn't seem like Britain has semis. (I can't imagine they'd be able to navigate the narrow roads.)

3. Is there a somewhat posh neighborhood near Chiswick that I can locate a family? The family is not super rich, but both parents work and have good jobs - definitely upper middle class. Even if there isn't a named neighborhood, a location would be helpful, so I can look on Google Earth to get a feel for what the buildings and houses look like.

4. Is a "flat" an apartment, meaning a single residence in a building of multiple single residence? Or does the term have multiple meanings? For example, in America, when a person refers to his "flat", it could mean a house - in this sense, it simply means "where I live".

5. When I was in Britain last year, I noticed that a lot of the towns had houses that were individual residences, usually two floors, all connected together in a long row. What is that type of house called? Row house?

A large building, multuiple floors, with multiple dwellings inside, accessed through a single front door with all the separate living spaces's doors accessed from inside the building. I don't mean a council building like the Powell Estate, but say a higher-end building in a more upscale neighbourhood.  We would call it an apartment building or apartment complex in North America.  (London area, if that makes a difference)

It's obviously pink, but what kind of pink?   I would call it "bubblegum pink", but what might Rose call it? 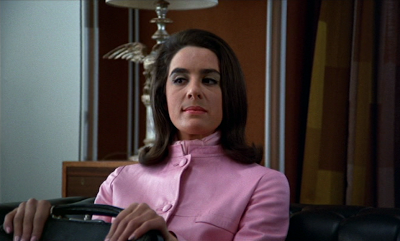 Google is telling me that open casket funerals are not common in the UK. So, if I have a character who is not making the funeral arrangements herself but who really wants to see the body of a dead loved one, how can that be arranged? (For the record, the character in question is about thirteen years old. Her parents are fine with her seeing the body, but they don't necessarily want to see it themselves.) If the dead person is going to be cremated, would there be a chance for loved ones to see the body before the cremation?

I'm not sure if this changes anything, but for the record, the death took place in Scotland and funeral/burial arrangements are being made in Scotland.

DO people use 'retard' as an insult in Britain? Specifically Wales?

*edit*
Thanks for your responses, people! To be more specific, I am looking for intentionally hurtful language; the circumstances in my fic include physical/mental violence against the character also being called whatever insult I end up picking, and it's set in the early 90s.

In my experience, retard is considered really offensive in the US, although in the sense of 'the teachers hate it when we say it so let's just say it as much as we can.' In college, I mainly hear it on sports teams, for what that's worth.

Please help - Google is failing me tonight: in what time of year are football and rugby played?  Spring, summer, fall?  How long does a season last?

Thank you very much for any and all help.

I apologize, but I didn't see a "sports" tag.

How would Rose refer to the zippered shirt she is wearing in the Impossible Planet/The Satan Pit?  I would probably call it a hoodie even though it doesn't have a hood.  Is there a better Britglish word?

Would the US show Little House on the Prairie be something Rose Tyler would be somewhat familiar with even if only from re-runs?  Or is there a British show I could reference taking place at a time where people wore similar type of clothing?  Context is a comparison to the clothing of the aliens on a planet she and the Doctor are visiting to the type of clothing worn on a show (my mind thinks Little House, what would Rose's think?)

There doesn't seem to be a tag for television, otherwise I'd have picked that.

Is there any particular agency, company or organization that is particularly known for being dedicated to making unwanted phone calls? Either especially dedicated telemarketers or collections agencies, but from the type who would potentially be trying to reach Rose Tyler. Are there any government organizations that would be calling her about something she could have forgotten to pay/attend who would be well-known for being dogged in trying to reach their client?
Collapse